On Monday, the Supreme Court of the United States heard oral argument in Weyerhaeuser Co. v. U.S. Fish and Wildlife Service, concerning the agency’s authority to designate land as critical habitat if it isn’t even habitat in its present condition. Recognizing that such a power could easily be abused, the short-handed court spent much of the hour searching for some limit. Weyerhaeuser argued the limit was clear from the statute: “critical habitat” must first be habitat. The government argued for a fuzzier line: such designations can also include lands that could become habitat with “reasonable effort.” 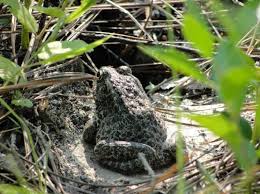 At the center of the case is the dusky gopher frog, a critically endangered species that has seen its habitat shrink dramatically due to human development, fire suppression, and the conversion of forests from open-canopied long-leaf pine to dense loblolly pine. Today, there are only six populations of the species in Mississippi and no other place with all of the conditions needed for the frog’s survival: ephemeral ponds for breeding, an open-canopied forest, and suitable habitat for the frog to migrate between the two.

Weyerhaeuser and other property owners object to the designation of 1,500 acres of their land as critical habitat, which has the ponds but neither of the frog’s other habitat requirements. If the property owner allowed frogs to be moved to the property, they wouldn’t survive for very long.

It’s not reasonable to say that this area is essential if the frogs will die anyway because there aren’t enough trees. — Justice Stephen Breyer

The agency has no authority to require the property owners to change their land to provide the missing habitat requirements and the property owners have indicated that they’re uninterested in doing so. Thus, many of the justices’ questions focused on whether the efforts required can fairly be characterized as reasonable.

If you have the ephemeral ponds in Alaska, you could build a giant greenhouse and plant the longleaf pines and the — the frog could live there. In other words, there has to be presumably some limit on what restoration you would say is required. — Chief Justice John Roberts

Although the government conceded that such efforts would not be reasonable, it failed to articulate any standard to distinguish the greenhouse hypothetical from what the property owners would have to do to restore dusky gopher frog habitat. Justice Breyer, a member of the court’s liberal bloc, came back to the question several times in search of an answer.

Is there anything you want to add in words that I would write if I were writing this opinion that would distinguish the case the Chief Justice first brought up where the only way to save these frogs, in addition to the ponds, is to build special hothouses in Nome, Alaska? A decision resting on that I — would strike me as far-fetched, from a situation where all you have to do in addition is drain six inches of swamp. If the decision rested on that, even if the owner said I’ll never do it, I would say it was a reasonable decision. Okay. That’s highly subjective. Are there any words that you could use that would distinguish those two instances? — Justice Breyer

My sense from having attended the oral argument is that the government’s answer (or lack thereof) left Justice Breyer and most of the other justices unsatisfied. In his rebuttal, attorney Tim Bishop, representing Weyerhaeuser, stressed that the efforts required here would be closer to the greenhouse hypothetical than the more minor modifications discussed in other hypotheticals. He stressed that even the Center for Biological Diversity, which argued in support of the government’s position, acknowledged “intense human effort and extensive habitat restoration” had been required for the species’ Mississippi population.

As reported by PERC’s Tate Watkins this summer, that effort has been as challenging as it has been praiseworthy.

Given the frog’s particular habitat requirements, it wouldn’t be easy. The [Nature Conservancy] would not only have to recreate a longleaf savanna ecosystem by thinning existing stands in certain areas, planting new ones in others, and managing the landscape with prescribed fire. Biologists would also have to establish a frog-rearing station that allowed them to release enough of the amphibians to give them a chance at survival in the wild. . .

One of the biggest challenges is the need to maintain the longleaf pines, which historically rely on fire. To that end, the Nature Conservancy conducts controlled burns on its property throughout the growing season. The fire crew requires a minimum of six people and is wholly reliant on weather, wind patterns, and the magnanimity of neighbors, one of which is a golf resort. The organization’s biologists also note the need to remove mosquitofish from frog ponds that don’t dry out completely every year.

Looking back over the longleaf prairie, [the Nature Conservancy’s Becky] Stowe emphasizes the amount of effort required to maintain this landscape. She also recognizes the unique position and mission of her organization, which enable it to navigate the costly federal approval processes that are needed to work with endangered species and carry out the project. But she also adds: “It’d be cool if private landowners could do something like this and get credit for it—or at least not get penalized for it.”

Justice Alito stressed that, ultimately, the case turns on who pays for the recovery of the frog.

Now this case is going to be spun, we’ve already heard questions along this line, as a choice between whether the dusky gopher frog is going to become extinct or not. That’s not the choice at all. The question is, who is going to have to pay and who should pay for the preservation of this public good? — Justice Alitp

If these costs are borne by the landowner, it seems clear that the land will never be habitat for the frog. In Monday’s Wall Street Journal, I explained that the potential $34 million in lost property value unnecessarily alienates the landowners when their cooperation will be critical to recovering the species.

The designation breeds resentment among landowners who otherwise might be partners in conservation. That’s a shame, because the dusky gopher frog’s future depends on such partnerships. Its existing habitat is too small for a full recovery.

It is always difficult to predict a case’s outcome from oral argument and Weyerhaeuser is no exception. However, it seems clear that, whatever the court decides, this controversial designation will not benefit the frog.

Fortunately, there are better ways to promote the frog’s recovery. By incentivizing the restoration of habitat, the government could avoid the conflict generated by the critical habitat designation. As the Nature Conservancy’s experience shows, when everyone is working toward the same goal, the dusky gopher frog can be put on the road to recovery.