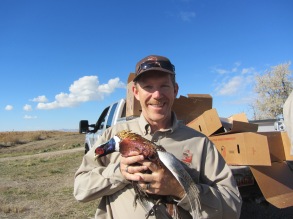 At long last, the Administration has chosen an acting leader for the U.S. Fish and Wildlife Service—an important federal agency charged with protecting and recovering endangered species. The selection: Greg Sheehan, the former director of the Utah Division of Wildlife Service.

By all appearances, Deputy Director Sheehan will lead the Service in a more pro-federalism, collaborative, and libertarian direction. He’s saying all of the right things about focusing on collaboration rather than conflict.

“I am thrilled to have an opportunity to work with Secretary Zinke and the great team at the U.S. Fish and Wildlife Service,” Sheehan said.  “I look forward to helping promote the fish and wildlife resources in America through collaborative partnerships with states, local government, the sportsmen’s community, and others.”

There’s good reason to take his expressed commitment to conservation and collaboration seriously. As the leader of Utah’s wildlife agency responsible for implementing the state’s Utah prairie dog recovery plan, he’s seen first hand how successful collaborative conservation can be at the state level—and that heavy-handed federal regulation can block those efforts.

As you may recall, the state of Utah was given a rare opportunity to take the lead on recovering the Utah prairie dog (thanks to a district court victory won by PLF for People for the Ethical Treatment of Property Owners). The state answered that call, developing a program to proactively recover the species by working with property owners. The core of that program was to move prairie dogs from backyards, playgrounds, and other developed areas (which couldn’t provide a long term home) and relocate them to public conservation areas (that could).

That program proved spectacularly successful, with the population numbers reaching record highs. Then the director of the state agency, Greg Sheehan explained:

“It was a win-win for everyone,” Sheehan says. “Local communities, local governments and private landowners were happy. And Utah prairie dogs have never done better.”

Unfortunately, the Tenth Circuit overturned the district court’s decision. That reversal threatens to put a stop to the state’s successful recovery program. If the Tenth Circuit does not reconsider that decision, or it is not eventually overturned by the Supreme Court, the state will once again be powerless to do what’s best for the species and people. You see, the federal regulation makes it a crime to do anything that affects a member of the species—even catching one to move it from the local airport to a conservation area.

Greg Sheehan bemoaned the Tenth Circuit’s decision when it was issued, for sacrificing conservation to bureaucracy:

“One of the biggest challenges to managing Utah prairie dogs are federal rules that do not allow biologists the flexibility they need to do what’s best for the species and for the people who live in areas where prairie dogs are found,” says Greg Sheehan, director of the Utah Division of Wildlife Resources (DWR). . . . “State management was a win-win for everyone,” Sheehan says. “Prairie dogs were placed in the best suitable habitat, and private landowners who had conflicts with prairie dogs could ask that the animals be relocated to more suitable habitat.” “Now,” he says, “the management of Utah prairie dogs is back in a quagmire of federal bureaucracy. The state rules allowed us to work proactively, with local governments and landowners, to do what was best for the prairie dogs and those who live with the animals in the three counties.”

If the Fish and Wildlife Service’s new Deputy Director continues to advocate the approach to conservation that he has as a state conservation official, it could be a sea change in how the Endangered Species Act is administered. For decades, conflict has dominated, with federal bureaucrats severely punishing the property owners who have made their lands available to endangered species (which creates perverse incentives). That has translated to a pretty dreadful recovery rate for endangered species, but thankfully not a high extinction rate. Empowering states, improving incentives, and unleashing private conservation hold much greater promise.