Along both of the nation’s coasts, property owners, businesses, and environmental groups are concerned about the potential consequences from slowly rising seas. The models for future sea level rise vary widely. But many homes, businesses, and public facilities could potentially be impacted, even under conservative estimates. 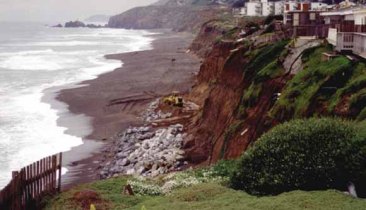 If you can’t literally stem the tide, you’re left with adaptation. The burdens of rising seas fall heavily upon a relatively few, giving them strong incentives to invest in strategies to mitigate those harms. (Whether part of those costs should be borne by the society as a whole is another important question, although one beyond the scope of this blog post.)

It’s ironic, therefore, that states most concerned about climate change, like California, restrict property owners from engaging in climate adaptation. The California Coastal Commission, which regulates all development in the coastal zone, has increasingly been reluctant to permit sea walls and other protective devices necessary to shield property from rising sea levels.

Instead of allowing property owners to pursue climate adaptation, California has adopted a policy of “managed retreat,” according to which it limits development and maintenance near the coast to allow sea level rise and substantial erosion to proceed unrestricted. This is a cruel policy as it further harms the victims of sea level rise, by barring them from defending their property as it slowly floods or erodes away.

PLF recently won a case challenging the Coastal Commission’s policy restricting protective devices and defending the property owners’ right to protect their property. Property owners have a right to defend their property from destruction, without harming their neighbors.

California’s justification for its cruel policy is that preventing protective devices encourages erosion and grows nearby beaches (which the state owns). But property owners do not owe a duty to their neighbors to allow erosion and the state’s interest is not the sort of harm that permits limits on others’ property rights. On the contrary, property owners generally have an obligation to provide lateral support to their neighbors to prevent erosion.

Reversing this rule—depriving property owners of the right to prevent their property from eroding—would cause much mischief. Lots of things people take for granted reduce erosion. Planting trees, grass, and other vegetation is probably the most common. If the state wants to incentivize property owners to adapt to rising seas through vegetation, where possible, that may be fine. But they can’t deprive them of the right to defend their property using protective devices if that’s the only method that will work.

That is unless the government is willing to pay property owners under the Takings Clause for restrictions on their ability to protect their property. If the state would like to maintain larger beaches in rising seas, this would allow them to do it, since public beaches satisfy the Takings Clause’s Public Use requirement. And it would have the additional benefit of compensating the victims of rising seas for those harms, spreading the costs across the broader society. That’s much more fair than the government imposing additional harms on the victims of rising sea levels by forcing them to watch their property slowly flood or erode away.

If we’re entering a period of sustained sea level rise, it will be even more important that property owners’ right to protect their property be secure and that they be compensated when that right is taken from them.