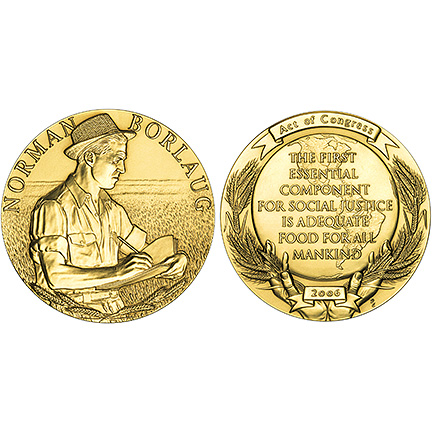 March 26th would have been the 105th birthday of Norman Borlaug, a Nobel Peace Prize winning agronomist widely credited with saving a billion lives. He worked tirelessly to develop new strains of wheat that would increase yields, resist disease, and feed a growing population of people, especially in developing countries.

Vogt and Borlaug are among the few who have some glimpse then of the magnitude of the tests that face our species today, as we move ever closer to 2050, when the world will hold 10 billion souls. But their understanding of how to resolve them differs, as do their views on their causes. Vogt sees the city reaching across the dry lake bed to engulf the last fields and streams and says: Hold it back! We cannot let our species overwhelm the natural systems on which we all depend! Borlaug sees the pitiful scrim of wheat and maize on the tract of land and says: How can we give people a better chance to thrive? Vogt wants to protect the land; Borlaug wants to equip its occupants.

In the face of environmental challenges, do we despair and retreat? Or do we face the challenges through innovation, in an attempt to create both a healthier and more prosperous world?

Both men were responding to the perceived threat of unlimited human population growth in a world of presumably finite resources. Followers of Vogt, which Mann labels “prophets,” advocated for restrictions on population growth and succeeded in getting many countries to adopt such policies. “Wizards,” Mann’s label for Borlaugians, by contrast, sought to feed and house the growing population, while reducing environmental impacts.

Although people continue to debate overpopulation as an environmental challenge, the results so far strongly favor the wizards. Prophets predictions of mass starvation and death in the 1960s, 1970s, 1980, and 1990s proved spectacularly wrong (although such predictions continue to be made). Disaster was avoided because the wizards succeeded, through the green revolution, in dramatically increasing the productivity of poor people’s farms. That, in turn, has allowed more people to leave hard agricultural work for cities, which promise greater prosperity. Because human prosperity tends to also promote awareness and interest in the environment, the result is a virtuous circle—the innovations that overcome immediate environmental challenges promote the prosperity necessary to solve future ones.

Despite these results, the same conflict of values is apparent in environmentalists’ response to today’s environmental challenges, whether clean drinking water, recovering wildlife, or responding to climate change. For each issue, there’s a camp that insists man’s impact on the globe must be reduced, usually by decreasing his number, and another that embraces human ingenuity and prosperity as the best of means of finding a solution (without resorting to human misery).