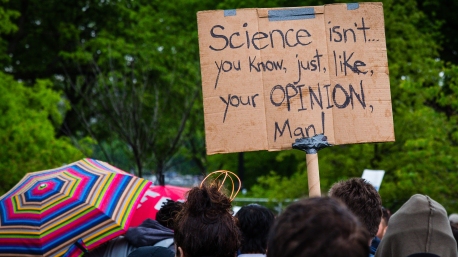 Last weekend, thousands took to the streets for the March for Science. As with any event with so many participants, trying to distill a single theme or principle is impossible.

Some were protesting the perceived rejection of science and the scientific method by their political opponents. Others were protesting an expected decrease in government funding for scientists. And many were protesting the alleged silencing of scientists (although massive protests with no fear of reprisals undermines that claim). For some, it was an opportunity to show off their science-themed puns.

There is a real problem with science and its role in society today, but the March for Science only gets half of it. It’s absolutely true that many instinctively reject scientific findings that challenge their prior assumptions. For instance, conservatives and libertarians are more prone to skepticism of climate change, in part because it is so closely tied to big government policy prescriptions.

But there’s an equally troubling problem on the other side. Many embrace spurious scientific claims or promote the political preferences of scientists as if they were science, simply because they confirm their priors. Slate (of all places) has an article that gets the problem exactly right:

Being “pro-science” has become a bizarre cultural phenomenon in which liberals (and other members of the cultural elite) engage in public displays of self-reckoned intelligence as a kind of performance art, while demonstrating zero evidence to justify it. On any given day, many of my most “woke” friends are quick to post and retweet viral content about the latest on what Science (and I’m capitalizing this on purpose) “says,” or what some studies “prove.” But on closer look, much of what gets shared and bandied about is sheer bullshit and is diagnostic of one thing only: The state of science (and science literacy) in this country, and most of the planet for that matter, is woefully bad.

GMOs. Nuclear power. Vaccines causing autism. There are too many fad “scientific” findings to list. But all of them have the same root cause: data can be easily manipulated to produce a desired result and it will be instinctively accepted if it confirms preexisting biases. The pressure for scientists to publish meaningful findings creates an overwhelming incentive for them to ensure their findings are newsworthy (and appeal to the biases of publishers).

As a recovering economist who has done some econometric work, this part of the Slate article hit home:

This leads to the other “big bad” in science research and, therefore, a widespread misunderstanding of science by the lay pseudo-intellectual community: allegiance to the all-mighty p-value. One sign I saw at a March for Science rally was the somewhat creepy inducement to “Show me your p-value!” The popular understanding of the low p-value (the common cutoff being less than 0.05) is that the data attached to it must be true. That’s a false understanding. The p-value actually means that the data in question has less than a 5 percent chance of being the result of chance if the underlying experimental null hypothesis is true. If you don’t know what that means, don’t refer to p-values. Further, a great number of studies have basically been manufactured simply by querying large data sets with a high number of possibly relevant questions. By the math of it, around 1 in 20 of these questions will yield a positive result that can be published. [Yet t]his happens approximately all of the time.

Science has a serious internal problem. And it’s not just that scientists are doing bad science. It’s that scientists (and their supporters) are passing off their political opinions as science. Science can only answer so much; much will always be left to moral judgment and prudence. For instance, science can tell you how to get a rocket to mars; it can’t tell you whether it’s worth the expense.

he prime example of the conflation of science and scientist’s political opinions is Bill Nye the Science-y Guy. (I must confess that I grew up on both Bill Nye—and Beakman’s World—and have the same ingrained instinct to like and trust Bill Nye that much of my generation shares.) Bill Nye recently released a new television show which promotes a combination of basic scientific experiments and Nye’s political opinions as science. The low-light of the show, so far, was Nye suggesting that the government should stop people in the developed world from having “extra kids” to reduce climate change. That belief is abhorrent and most definitely not science.

Scientists are not the sole cause of this problem. Many politicians, activists, and others have been complicit in blurring the lines between science and scientists’ political opinion. Nowhere is this problem greater than environmental law, which is a complicated combination of difficult science and intractable economic and social trade-offs. Because those issues are inexorably linked, environmental science tends to attract scientists with particular political opinions. No one would be surprised, for instance, to find that few scientists working at federal agencies are skeptical of regulation as a solution to environmental problems. If they had that view, they’d be working somewhere else.

Non-scientists with a political axe to grind contribute mightily to this problem, by blurring the lines between science and scientists’ political opinions on issues in which they have no expertise.

Allow me to demonstrate with a personal example. About a month ago, I testified at a congressional hearing on the impacts of the Endangered Species Act on economic and infrastructure development. After that hearing, the Washington Post ran an article titled “Democrats fear that Trump has barred key federal workers from speaking to them.” Most of that article was speculation over whether the administration was silencing bureaucrats opposed to the administration’s policies. But the article concluded with an attack on the witnesses (including me) at the congressional hearing.

Rep. Rob Bishop[‘s] (R-Utah) . . office sent quotes from witnesses at the hearing to media that support the chairman’s view that the act slows development. “Nearly 100,000 projects had to undergo time-consuming and expensive consultation even though none of them would likely jeopardize a listed species or its habitat,” said Jonathan Wood, a staff attorney for the Pacific Legal Foundation. . .

The statement, emailed by committee spokeswoman Molly Block, didn’t list the species or areas that Wood [] referenced. Unlike Fish and Wildlife experts, neither of the witnesses are scientists who have expertise in animal habitat and the impacts of development on species. With no experts present, Grijalva had no idea if their statements, which could influence future legislation, carried any truth.

This dismissive reporting is made worse by the reporter’s failure to contact a quoted source or look up the source of a quote. (I’m not that hard to find.) If the Washington Post‘s Darryl Fears had bothered to look up my testimony (which was available on the Committee’s site here, as well as here, here, and here), he would have found the source of my quote and known that my claim was based on a study from an environmental group that supports the Endangered Species Act. But it was easier to dismiss the quote because it “didn’t list the species or areas” that were the basis for the claim.

But the bigger issue is the article’s blithe dismissal of any witnesses other than “scientists who have expertise in animal habitat.” A biologist would be a very valuable witness to testify on biology questions. But what good is a biologist on the economic and legal consequences of a particular policy? For that, wouldn’t you want a lawyer, an economist, or a businessman? A biologist has no special expertise on these questions and it is a mistake to privilege their political opinions just because they have expertise on other issues. It serves Congressman Grijalva’s political purposes, so he’s happy to make the claim that only biologists’ views on legal questions matter. But it’s disappointing that a reporter at a prestigious paper would unquestioningly report it as fact.

Science is incredibly politicized and situations like this make it worse, not better. (I submitted a letter to the editor criticizing the article on these grounds, but unlike to the Posts’ Fact Checker, the Washington Post was not gracious enough to acknowledge the criticism.) If science’s problems are ever going to be resolved, both scientists and their supporters are going to have to exercise some humility. Science is extremely important and scientists have a meaningful role in bringing their expertise to bear on policy questions. But not all science is created equal and not everything a scientist believes is science.